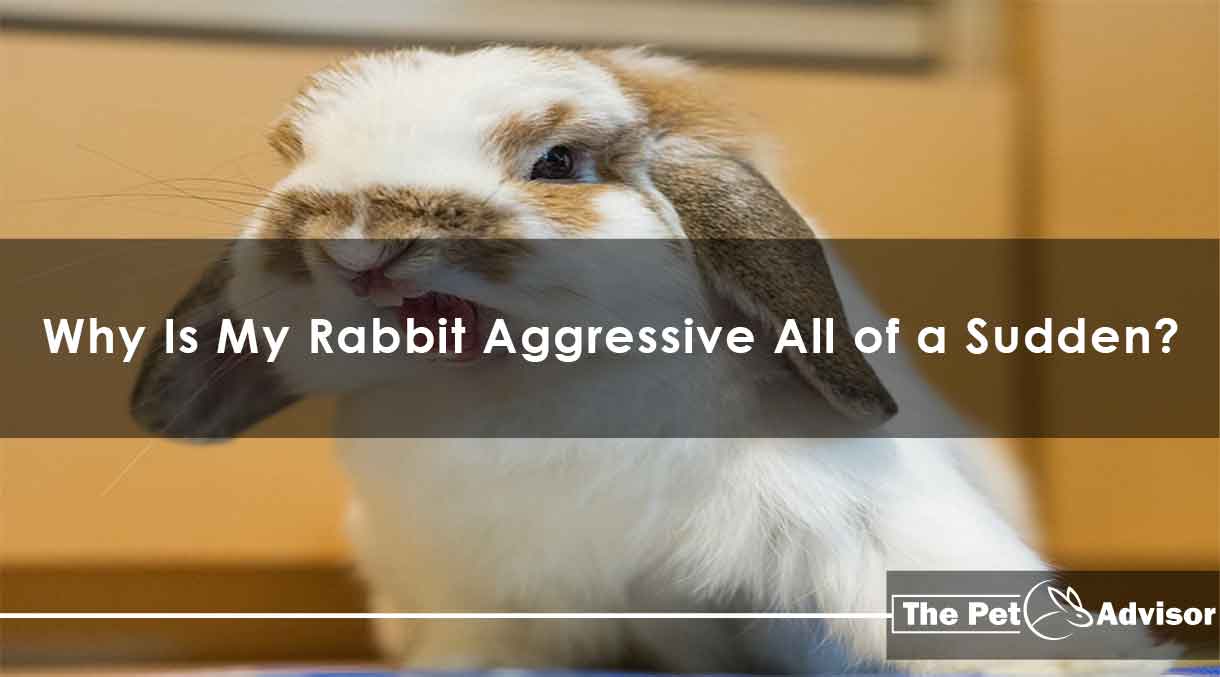 Rabbits and cats have many things in common. Both are cute and cuddly all the time, but suddenly they can turn into aggressive animals. Yes, your furry bunny can also act like a little monster all of a sudden. If you are a new rabbit owner, it’s very common that it will pop up in your mind – “why is my rabbit aggressive all of a sudden?”

There are plenty of reasons why your rabbit acts aggressively all of a sudden. If it’s the mating time, or if it feels threatened by another rabbit, or if it has hurt itself – the bunny can turn fierce.

So, how to know if your pet has become aggressive? How do you deal with such a bunny and calm it down? Well, these are what we are going to discuss here today.

What Are the Signs of Aggression in Rabbits?

There’s a thin line between aggression and simply not being interested in mingling. You have to understand that. Sometimes, rabbits don’t feel like communicating with you or make a move to show that it is feeling affectionate. That’s something you don’t term as aggression. Here are some signs from which you can clearly deduce that your furry pet has entered an aggressive mode.

Why Is My Rabbit Aggressive All of a Sudden?

As we have mentioned earlier, there are plenty of reasons why your rabbit is acting aggressively out of nowhere. Here, we are going to explain some common reasons. If you are wondering, “how do I stop my rabbit from being aggressive?”, we’ve got you covered, as well.

1. The Rabbit Is Sexually Active

This is one of the most obvious and common reasons why your domestic rabbit has turned violent. It’s a natural call that the rabbit gets sexually matured. Yes, it can happen overnight. Within a very short period of time, your rabbit can turn from a cute and cuddly animal to a dominant male in the territory.

So, naturally, the male rabbit tries to act aggressively to draw the females’ attention (even if there’s none) and attempts to leave a mark of dominance around. If you have two males, both will definitely try to dominate the other to take control of the house.

So, spaying or neutering can be a good solution to this. Or, you can go for one or two females or one female and one male for balancing.

2. You Have Brought in A New Pet

If you have recently brought in a new pet, whether a rabbit or cat, dog, etc., your existing rabbit may act very violent. As we have seen, rabbits are strictly territorial, and they don’t like their territories being violated by anyone else. So, if they notice another animal around, especially if it’s a rabbit, they won’t act friendly.

You need to be extra careful while introducing the new pet to your rabbit to solve this problem. You must know how to introduce your rabbit to a new pet. Keeping the pet away from the new one and gradually introducing it to the rabbit can cool the environment down. So, act accordingly.

3. The Rabbit May Be Stressed and Threatened

This is perhaps, the hardest to diagnose the problem. Almost all rabbits get stressed at some point, and you can only get it if you spend a lot of time with them. A common reason for the stress is that they feel threatened by someone else. It can even be you! If you are doing something that can trigger it, you will notice that the rabbit is taking its defensive positions. Check the sign of aggression part of this article.

To make sure the rabbit isn’t stressed out, you need to understand if it’s feeling threatened by anything. Is it a dog, a cat that is bothering it? Or is it something you are doing that is making it scared? Identify it and stop doing it or remove the other animals from around.

One of the common traits among wild and domestic animals is the expression of pain. Animals, when hurt, act pretty aggressively to anyone else. They don’t feel like getting touched and feel extremely annoyed at that time. Remember when you took the rabbit to the vet last time? Did it act pretty normal? Nope.

If you can sense that it’s in pain and hurt itself, carefully examine it without bothering it. If it doesn’t let you touch it, call the vet.

5. Your Action May Provoke It

Yes, we do like to cuddle these furry animals all the time, but it’s no guarantee that they share the same feeling. The pet may feel quite annoyed if you are trying to cuddle it every now and then or just picking it up from the middle of something and start to cuddle. This pisses the rabbit off, and it may start nipping you.

In this case, you need to be very gentle and loud. Don’t just grab it all of a sudden. Announce your presence and offer it good treats every time you cuddle it. This will develop the bond between you two and make it less aggressive one cuddle at a time.

Does My Pet Rabbit Hate Me?

Well, not at all. A pet rabbit becoming aggressive has nothing to do with hating or loving you. As we have seen, rabbits can turn aggressive at times because of some justified natural reasons. If you can easily make sure that the odds of it becoming furious are removed, it’s highly unlikely that it will try to get violent.

If you were wondering, ‘why is my rabbit aggressive all of a sudden?’, I hope this piece has clarified your query. It’s natural that a living being won’t be acting nice and cute all the time, neither do we, right? So, it’s obvious that some pressure points trigger the bunny to become monstrous sometimes. Identifying those factors and removing them should easily turn it back to normal!