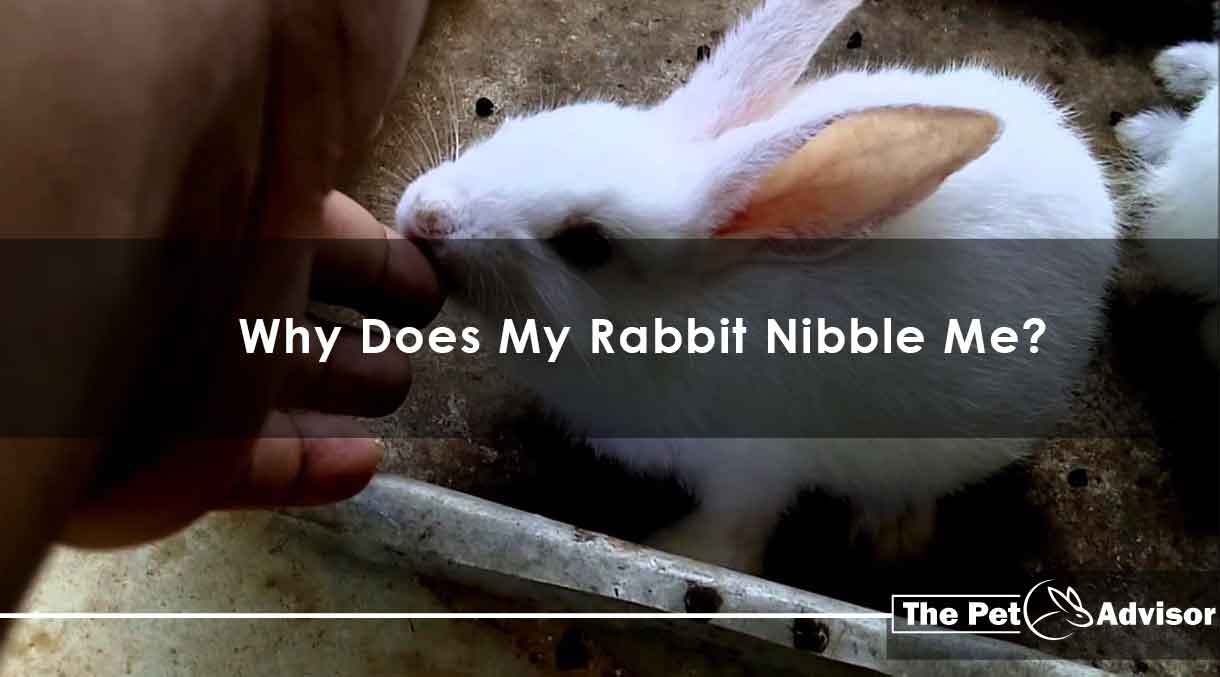 It’s true that pets can and do adopt monstrous characters at some points in their lives due to several reasons. That’s why pet owners freak out when their pets try to bite them. This is true for rabbits, as well. When they are sick, frustrated, or even angry, they tend to bite people who try to mess with their personal space.

Why does my rabbit nibble me? – this is a question that pops up in the minds of most rabbit owners when they discover that their furry friend is trying to bite them once in a while.

The most common reason for nibbling is the pet is feeling affectionate for you. If you don’t see any aggression in it, it’s probably trying to express its love and care!

However, is biting something to worry about? Well, let’s find out!

Why Does My Rabbit Nibble Me?

There are plenty of reasons why a rabbit would nibble you. However, you need to understand the difference between a simple nibble and a bite. Bites may translate into many things, including anger and aggression, whereas nibbling may mean affection most of the time.

Let’s find out why does a rabbit bites.

It’s Defensive: A very simple reason for a rabbit to bite is defense. Whenever your bunny feels insecure by your actions, it may try to defend itself by biting you. If you are grabbing it with your hands without measuring its mood, you may trigger it to act a bit aggressively.

It Needs Dominance: Male rabbits tend to focus on gaining dominance over its group when it achieves maturity. If you have multiple rabbits in the cage, you will probably find the senior male rabbit to act more aggressively to send the message of dominance to the other.

This exhibition of dominance includes biting around as it may find the owner as a threat to its leadership. So, you need to be careful while picking it up in front of others.

The Rabbit is Sick: A very worrying reason for the rabbit’s biting is sickness. Sometimes, as the bunny feels sick and tired, it won’t be entertaining any touch and cuddle. It may find it very annoying and disturbing if you are cuddling it while it is ill.

So, naturally, it will try to bite you away from it. This way, it may give you a signal to leave it alone as it doesn’t feel like hanging around with you casually. You can be assured that the bunny is sick if you notice that it’s been sitting in the corner of the cage with zero activism.

Zero Bonding: Bonding plays a great role in behaving the rabbit. If you have just brought in a new bunny at home, you need to allow it a bit of time to get used to its owner. You need to spend a lot of time with it, play with it, and make it feel comfortable. Otherwise, it will not develop any bond with you, and surely will feel your presence as a threat to its peaceful life and would want to bite your fingers whenever you reach out to grab it by your hands.

It’s Sexually Active: Another common reason for the rabbits to become aggressive and seemingly interested in biting is their sexual activism. Male rabbits become sexually active at some point in their lives and try to grab the attention of the females around. Even if there’s no female, it will still practice its natural instinct and behave in a more ‘manly’ manner.

This way, it will try to eliminate any competition around it. Whether it’s another rabbit around or any other pet, it will try to behave aggressively to prove its male character in different ways. Biting the one who tries to pick it up is one of the ways.

It’s Affectionate: Finally, there’s a very interesting reason why your rabbit may try to nibble you. It may feel affectionate and loving towards you when you are constantly taking care of it. For example, if you groom it, stroke its body, and show physical affection towards it, the bunny will try to return it to you.

The common signs of its affection include licking, gentle nuzzle, and of course, nibbling. You don’t need to freak out when it does that, as you won’t hurt yourself because of this bite, as it’s pretty gentle, and the bunny knows it too.

So, if your bunny is nibbling you, you need to observe its other activities. If it seems pretty normal and gentle but still trying to nibble you when you take care of it, it’s most likely because of its affection and gratitude. So, enjoy it!

Signs of Affection from Your Rabbit

Okay, so you are really into that affectionate bite, right? Well, there are many other ways your rabbit can show affection towards you. Here are some of the key signs that your rabbit really loves you and tries to express its feelings.

How to Prevent My Rabbit from Biting?

Now, unless your rabbit is nibbling you out of affection and love, you need to be concerned about its frequent biting. Here are some ways you can mitigate the biting tendency of your furry friend.

Alright, so, by now, you are pretty much familiar with the nibbling and other affectionate behavior of a rabbit. Let’s find out some of the common behaviors of a rabbit to know it much better. Here are some quick traits that a rabbit shows that may interest you!

If you can differentiate between biting and nibbling, things will become easier for you. Yes, rabbits do bite once in a while for a plethora of reasons, but not all biting needs your sharp attention. If it’s nibbling affectionately, this is something you need to enjoy as it’s the sign of your bunny’s love and happiness. For other types of biting, we have already mentioned the precautions. Just try to follow them as much as you can.