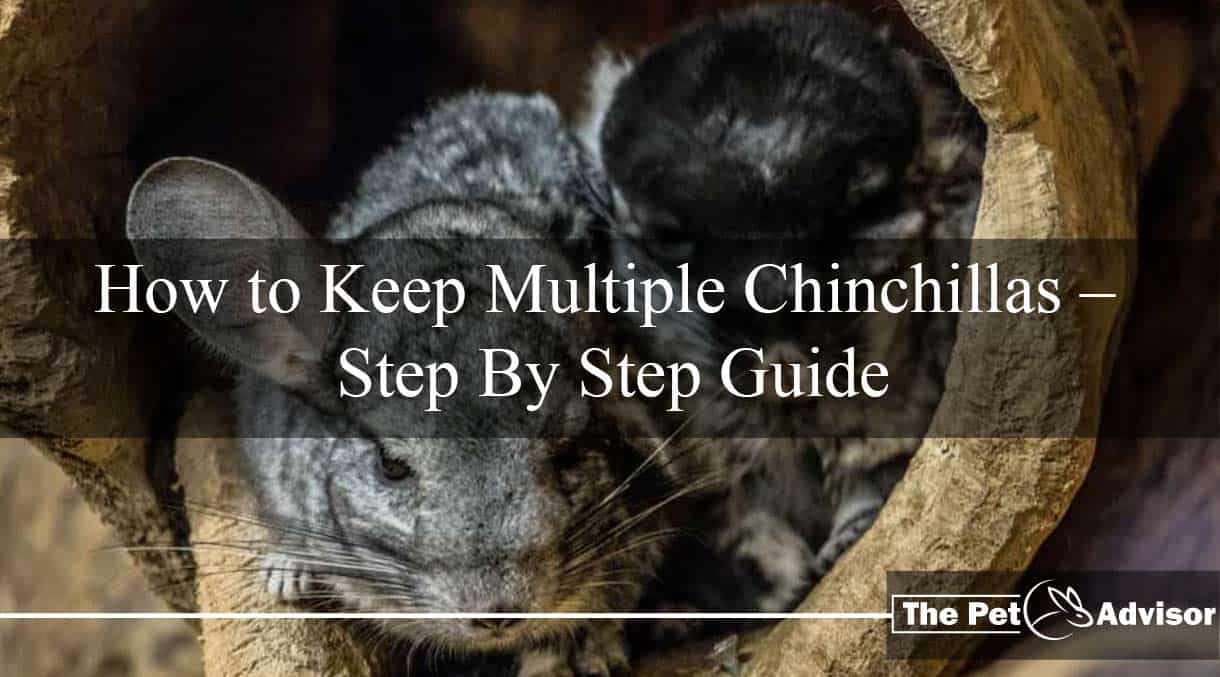 You will be terribly mistaken if you take Chinchillas at their face value. These little furry and chubby pets are quite cute but can turn into budget-sized monsters when it comes to invading their ‘territory’.

Yes, Chinchillas do live in large packs in the wild, but the cage pets act a bit differently than the wild ones. If you introduce a chinchilla with another without any prior preparation and in a quite unprecedented way, things are going to be a bit chaotic. The game of thrones is something that you don’t want to enjoy.

So how many chinchillas can live together and how to make them stay in a group is going to be some challenging questions, and we are going to be answering them.

How Many Chinchillas Can Live Together?

Although you may build a huge chinchilla cage and stuff 3 to 4 chinchillas there, it won’t be a good move. Pet advisors recommend that there should be only 2 chinchillas in a cage together. It is good for both their health and mental condition.

Yes, a chinchilla can live alone. But at times, it may show its urge and restless nature for a mate that usually is of the opposite gender. Then it should be gifted with a new mate immediately.

How to Keep Multiple Chinchillas?

Now when you’re trying to put another chinchilla in the cage, you need to be a bit careful and follow a few simple steps to do it. Here’s how you can do it step-by-step.

This is a crucial phase. Chinchillas will know each other in this phase, and it can’t go wrong. So you have to very careful. Here’s what to do in this phase.

Take the new one to the vet: Before you even let the old one greet the new one, take it to the vet after you have adopted it. The Chinch may look pretty okay and healthy, but you never know what disease it may be carrying, right?

Take it to the vet and run a complete check-up. Then vaccinate it if necessary with required vaccines. Once done, take it home but don’t put it near the old one now. Keep it in a separate room for two weeks quarantine.

Keep the cages close: When the quarantine period is over, the new one is now ready to meet the old one. This time, simply put both the cage a few meters apart and make sure that both can see each other. In this manner, both pets can see and recognize each other every day. Don’t worry if any of the two is showing aggression; just give them time to mingle.

Put the cages even closer: After a few days when both the chinchillas are familiar with each other, you can now put their cages close to each other. Observe their behavior towards each other. You can alternatively change their cages. Switching the cages will accelerate the process of getting used to the other one as they can get used to the smell of their counterpart faster.

Let them play in an open space: Now, when they are living next to each other for a long time, you can at times take both out and leave them in an open space. It should be somewhere where the pets don’t claim their territory. So, as it’s neutral, the chances are low that they will fight over their portion of land.

Keep them in this situation for about half an hour. If any of this gets tempted and aggressive before the period ends, immediately take both of them to their cage.

Now comes the second phase, where you actually move both of the chinchillas to a single home. Here’s what you will do.

Build a new home: Don’t put them in any of the old homes. The old cage contains the smell of the one that lived there before, and it will be subconsciously claiming its territory. So the best thing to do is to keep both of them in a new place. Here, nobody can claim their own portion.

Give new bedding and toys: Now don’t put the old toys from the previous homes into the new ones. Avoid repeating the bedding, as well. Provide complete new bedding and put new toys inside. The old bed and toys will have the smell of the previous one, and also the one that owned those stuff will try to snatch and claim them. So, give them new things.

Observe: Now that they are placed in a new home together, you’re not done. You have to observe both the pets for at least a week after you have put them together. Try to understand if they are bonding or not. If you can see there’s no quarrel or fight, you can assume that they are bonding quite well.

On the other hand, if you can notice that one of both pets’ fur and skin is getting torn, then it may mean that one or both have been involved in a fight. Then immediate action should be taken. Apart from that, you also need to observe if any of the two is becoming dominant or not, as that may lead the other one to starve and deprive of playing.

After a month or so, when you notice that the pets have bonded together, now it’s just about maintaining both of them. Try to give them ample space with a huge cage where both of them can find their own playing field.

Make sure you build a couple of hiding places for both the chinchillas and make sure you are providing enough food and water for the two of them. Keep enough toys for the two so that not a single one fights over the scarce toys.

So there you have it! If you were wondering how many chinchillas can live together and how to make them stay in a group, we believe this article has made it absolutely clear to you. Follow the process that we have shared when you are bringing in a new chinchilla home, and you will surely be successful!