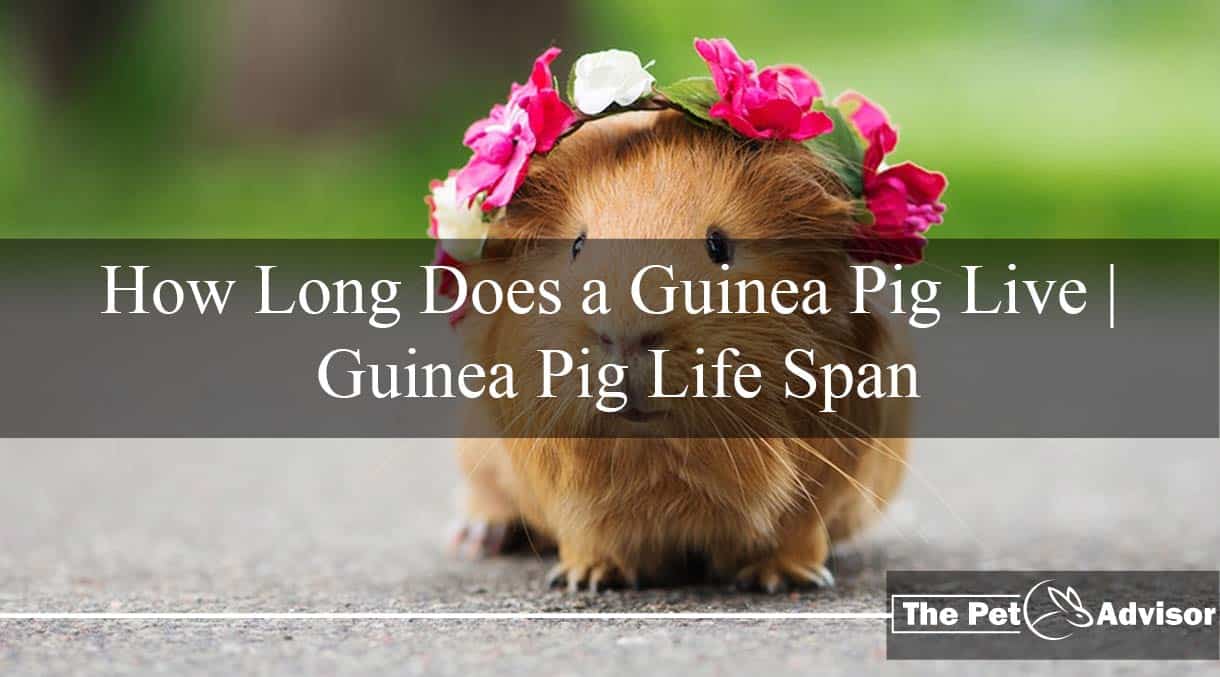 Guinea pigs are adorable animals. With their cute faces and adorable fat body, it is not possible for someone to overlook their beauty. If you’re wondering to take a guinea pig as a pet, it is a must for you to study about their life expectancy first. Why? Well, there are a lot of people who actually want pets that live for long life. Again, there are the ones that think if their pets live for 4-8 years, it’s enough for them.

Want to know how long does a guinea pig live? Well, to know your answer, dive into the core of this article.

The Cavy, also known as the Guinea Pig is from South America origin. Starting from mountains to grasslands, they inhabit a variety of terrains. They often live inside the burrows they prepare for themselves. Sometimes, they also live inside abandoned burrows made by other animals.

As guinea pigs are more robust than their smaller cousins, they can live longer than hamsters that stay alive for around 2-3 years. You can expect a guinea pig to live for 4 to 8 years. There are types of guinea pigs that have differences in life span.

Abyssinian guinea pigs live for approximately 5 to 6 years if they stay in a happy and safe environment. As they are known to be excitable, if you do not look after them properly, they’ll get stress-related illnesses.

There are short-haired guinea pigs and there are long-haired ones. The ones with the long fur cannot groom themselves as the short-haired ones do. If you don’t groom the pets daily, the fur can get tangled with each other which can produce a thick mass. This can later, cause skin problems and infections which can be a threat to your pet. Thus, life expectancy can reduce while leaving you with sorrows.

Young Peruvians may also face problems suckling their mother’s breast due to the long hair issue. This can lead to malnourishment and slow growth.

Fun Fact: The longest living guinea pig in the world, according to Guinness Book of Records was Snowball. He lived in Nottinghamshire, England who died in 1979.

Though the weights of guinea pigs may differ, the average weight a male guinea pig holds is 800-1200g. On the other hand, the female weighs slightly less though. They have around 600-900g of weight.

The heart of Guinea Pigs beats 250 times per minute.

Do not confuse guinea pigs with hamsters, gerbils, and mice. Compared to these animals, guinea pigs come in bigger shape. They’re a little different than your average rodent pet. The average size of guinea pigs is 10-12 inches (25-30cm).

How Long Do Guinea Pigs Live as Pets?

The life expectancy may increase if guinea pigs are kept as pets. Into the wilds, the life of guinea pigs remains in threats. Wild animals are always on their backs to hunt them. The weather and climate also have effects on their health.

You’ll notice that the newborn guinea pigs are fully haired. They keep their eyes wide open while their eyes start to show. This is the stage of precocious (early development).

A guinea pig usually has 65 days of gestation period. The sow (female guinea pig) becomes ready to give birth to babies from about 2-3 months. At this stage, the body weight usually reaches to 500 grams.

Surprisingly, the young ones suckle from their mother just for a couple of days only. Within a very short time, they start to feed on solid foods. Gradually, they feed on the mother’s milk and solid as well as solid foods for around 3 weeks.

At this stage, you should separate their mothers and sisters from the young ones, as they’re close to sexual maturity.

You should keep in mind that guinea pigs grow very fast. In the time of birth, their sizes are around 8-10cm. They reach to 15 to 20cm by 8 weeks. After 8 weeks have passed, the growth will slightly pause for a while. The guinea pigs will grow slower after that until they reach 14 months.

If the guinea pig’s parents and grandparents had a long life, then you can expect the guinea pig to have a long life too. At least that’s what genetic science tells us. However, the expectancy can still fall as the gene pool gets weakened. This can happen due to the nature of the cross and selective breeding patterns in guinea pigs.

So it is always preferable to produce a ‘pure breed’ all the time. Breeders should look into this matter very seriously.

All of these can lead to infections, smaller litters, and increased mortality during birth. However, you should always stay connected with pet stores and vets. If you take good care of your ‘furball friend’, there’s a chance of having a long and happy life.

You should make sure that your guinea pig is having a friendly diet. Having the best diet can increase the life expectancy of your pet. To make sure the guinea pig stays healthy, offering fresh food using quality foodstuffs is a must.

Remember, guinea pigs are basically grazers. It is mandatory to offer your guinea pig good quality grass or hay for essential digestive health.

Grass-based pellets are preferable for your guinea pig as part of its important Vitamin-C intake. As the teeth of your guinea pig will grow continuously, grazing on these foodstuffs daily is essential for your pet. You can try offering the following things to your pet. These foods are rich in Vitamin C and you can feed these daily to your pet.

To avoid dehydration, provide fresh water throughout the day. You can also switch to fruits sometimes that are loaded with vitamins inside them. However, due to the sugar content, make sure you don’t feed too many fruits to your guinea pig. You can try the following fruits that are full of vitamins.

Let’s face it, guinea pigs love having foods almost all the time, Like humans, you need to make sure your pet works out to burn calories off. If they stay lazy, they can be obese which can be a threat to their health.

Offer an adequate-sized hutch or enclosure to your guinea pig. A 7 ft square size should be enough but we recommend 10 ft square which is perfect. This space should be large enough for your pet to run around, do laps and have fun. You can also keep toys inside to encourage your pet to run.

Now here’s a thing we should mention. You must have seen hamsters running on ‘Hamster Wheel’ on movies. Do not use hamster wheels for your guinea pig as these are not designed for its kind.

I’ve noticed that my guinea pig eat its own droppings. Will it have a negative effect on its health?

It is quite normal for a guinea pig to eat its own dropping. This behavior of guinea pigs is known as coprophagy. You’ll notice that your guinea pig is not actually eating its hard droppings. Rather, the droppings are small and moist ones which directly come from the anus of your guinea pig. You can probably relate this behavior with cows chewing the cud. The droppings contain protein which is important for the animal’s health and you should not stop your pet from doing it. It is not harmful at all; rather, it’s a natural process.

Do guinea pigs get along with other animals?

Guinea pigs can get along with rabbits if you introduce them with each other when they are young. However, you should make sure that the rabbits don’t hurt them. Guinea pigs are not friendly with mice, rats or hamsters. On the other hand, big animals like dogs and cats can be a threat to them.

How long do guinea pigs live if they’re in cold places?

Temperatures below 15 degrees are too cold for guinea pigs and be a major threat. If you see such circumstances, you should keep the guinea pig indoor.

How long does a guinea pig live? The brief answer is 4 to 8 years but life expectancy can increase as well as decrease. If you take good care of it, the guinea pig may live longer and healthy. If it’s not taken care of, then the chances of its sickness increase. Thus, within a short period of time, it may die.

To make sure you can take good care of your guinea pig, we have given detailed information you need. As you’ve read this article attentively, it’s time to put these practices in your practical life.