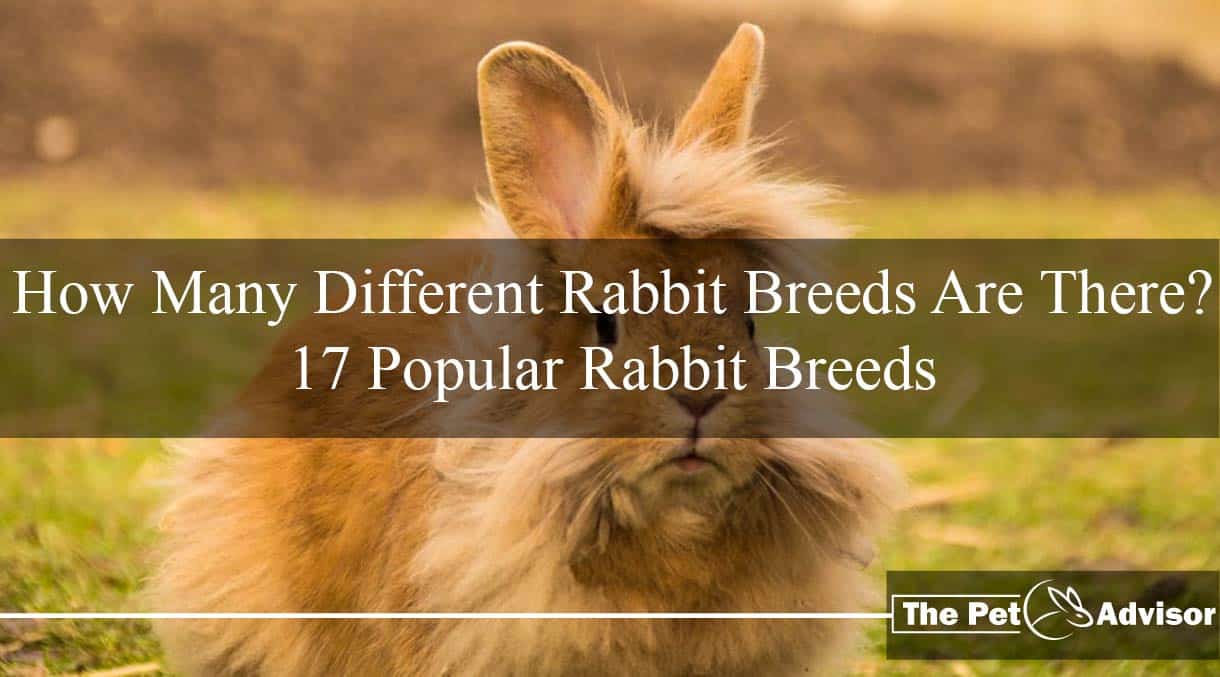 Rabbit owners from all around the world ask a common question; how many types of rabbit breeds are there?

The answer is 191 breeds. Wait! There might be confusion about the exact number. Let me clear it first.

Most people know there are 370 types of rabbits, while others know its 191 breeds. Now which one is correct?

But this result changed after an effective filter process. They did this based on the breed qualities, which later resulted in 191 classes.

And 191 is the correct breed. I hope you have got a concrete answer about the different rabbit breeds.

Now let’s move on to the second step.

The second session will enlighten you with the 17 most popular rabbit breeds. Each of these breeds is chosen over polls. Now, what was inside that poll? Three things that barely mentioned. I will write those in the description of each name. Let’s start:

Black is a beauty -Alaska breed proves it through their behavior. They are docile and good; plus, they can adapt to any environment. The reason for this standout feature is their root.

Alaska was crossed from Havanas and Dutch Himalayas. These two breeds are non-aggressive and ideal for petting, and each of them has an instinct feature.

For example, one is famous for splendid fur; another is for behavior. Crossing these two genetic behaviors resulted in a beautiful class.

The idea of this crossbreeding came from two German scientists named: Max Fischer and Schmidt. They tried to make a better class for petting and farming back in 1900. Finally, in 1907 two geniuses showed a better example and British Rabbit Council certified.

A mysterious rabbit breed so far in American history because the root is still confusing. Some experts believe that it was crossed from three European breeds named: Vienna, Beveren, and Imperial.

One other breed Lewis H. Salisbury (father of this crossbreed), was used for the Flemish giant.

No matter how confusing the root is, this breed still rules for its beautiful fur and meat. Farmers foster this class to make a better living.

They also sell the breed to seniors and adults because American rabbits suit them best. It’s because of pet behavior and color variations. It comes in two colors: white and blue. The blues one is the first before the white breed. It is the ancestor of the white breed.

History says, “It’s the largest rabbit in the rodent species” -definitely. The Flemish giant achieved the largest award for its weight and color; the average weight is 7Kg; it comes in 7 different colors.

While searching for the mentioned features, I found an interesting fact from Thomas Coatoam. He said it’s the father of all breeds.

If you look closely, you will find this class’s predecessor is best for meat and fur. That’s why farmers prefer this root before buying a new breed.

Not only for business purposes, but flemish bucks are also best for petting. Their behavior is decent for new parents; maybe it gets aggressive for getting frightened. Yet, the attitude can be figured out through proper training.

Mini rabbits are getting popular with teenage and grown-up moms. They love this for its babish nature. I will write about this in a minute; before that let me share an interesting fact.

Adrian de Cock (a breed expert) once noticed a burning need in pet society. So, he picked French lops and Netherland Dwarf for crossing.

The reason for choosing these types is for their size; one is oversized. Another is undersized. Another reason was their coats and nature. Their fur is soft and best for selling.

Now let me write about their nature: as I said, this breed is babish. Yes! They love toys and to stay inside the arm. Sounds cute, right? Definitely, that’s the major factor for choosing this mini buck for petting.

American Rabbit Association certified this breed for its meat. Continental giants are famous for soft and tender meat.

The major factor for this delicious muscle is its root. Yes! Flemish Giant is the ancestor of this breed. It was crossed back in 1893 to cover the protein supply of the human body. Continental giant is not only famous for delicious dishes, but also a better pet. This fluffy buck is intelligent and kid-friendly. Pet lovers call it fluffy-babe because of its semi-arched body structure.

So far, the cutest rabbit breed I have ever seen. Netherland Dwarf is the most acceptable pet in the UK and the US.

A wild rabbit crossed this initially; that experiment’s result was not satisfying because of its behavior. Later in 1980, it crossed several classes and, in the 20th century, resulted in a better breed.

A better version of this breed behaves quite well, though it’s aggressive. If you can train up and make sure a better environment, this will be your next cute bunny to hold forever -no doubt.

It was first shown in 1830 in the Netherlands, later the breed developed in England. The reason for crossing was fur, color, and a better pet.

Dutch rabbits come in 7 colors, and all the colors have one identical feature. That is the white shape; one can easily detect by noticing the collar difference.

Like the color variation, this breed is also unique in fur. It’s soft, smooth, and easy to groom. While grooming this little bunny, parents can notice friendly behavior. Yes! It needs a little care to be the best friend: no aggressive behavior or destructive nature. This is the main reason for choosing this for kids and senior citizens.

With an oversized ear and mandoline-shaped body, English lop gained better popularity in the new parent’s community. There is also another reason; it’s the personality.

English lops need fewer toys to entertain them. They only need slight affection and time; that it. It will be your best guy. Now, why has it an easy-going personality?

Scientists found the reason in the root; the cross-breeding. This breed crossed from three classes, namely flemish giant, holland lop, and french lop.

Each of the breeds has a sober attitude toward their parents. So, based on their attitude, experts crossed them to make English lop.

English Lop and French Butterfly are the roots of this breed. It was first crossed in 1850 for fulfilling the protein requirement.

It not only fulfilled the meat requirements but also filled up the pet parent’s expectations. French lop needs less care; it can grow faster within that little maintenance. As a result, farmers generate better profit by selling this.

Farmers also generate extra income by selling it for pets. It is a good friend to fresh kids and parents.

Mini Rex resulted from Black dwarf rex and Lynx red doe. It was bred for a thinned fur bunny and well-mannered pet.

Now let me share the fur composition with you: the fur of this class is different from others: it’s thin and soft. You cannot farm it for wool, but meat and petting.

As a pet, it requires heavy maintenance for its thinned fur. You have to ensure a moderate environment to avoid high or low temperatures. Otherwise, it will get caught with a cold. Apart from all of these, it’s good for the fresh-parents.

Don’t think it represents the polish; it was just named in England for its look. This breed was crossed from Dutch and Himalayan breeds for meat purposes.

Apart from protein requirements, it was famous for its short body shape. Polish rabbits have short ears and heads. That’s why it’s easy to detect.

The reason for its popularity is its nature; it’s tiny and easy to maintain. For that reason, experts recommend it for adults. Don’t let it play with the kids; Polish rabbits are sensitive.

This medium-sized bunny raised huge controversy about its origin. Some argued that it’s from English, but the truth is: it’s from Belgium.

Whatever the controversy is, pet enthusiasts love it for being heavy-weight. Perfect weight for meat and fur; the Beveren rabbit has thick fur with a hard coating. It saves them from temperature fluctuation.

This unique feature saves maintenance costs for parents. Parents only need to ensure enough space because this breed loves to roam around. If they can ensure the space, Beveren will be the best pet for senior citizens. So, before adopting this breed, make sure there is plenty of space for them.

Purley, a commercial breed; yes, the Californian rabbit was introduced for meat and coat. It crossed from Himalayan, New Zealand White, and Standard Chinchilla. Three of these breeds have their instinct features.

For example, Standard chinchilla is best for the dense coat; New Zealand white is best for its meat structure; Himalayan is for facial marks.

All these combinedly made this breed acceptable in the world of rabbit farmers. Farmers and parents have also accepted this breed; it’s because of the rabbit nature.

The Californian rabbit is a bit shy and quiet. Socializing this rabbit is tough; proper training can make them a better adapter.

French Angoras and Holland Lop are the roots of this breed. The breed was introduced back in 1985 as a better domestic pet. But ARBA disapproved of it several times.

Later the popularity and community acceptance constrained the authority to think about this breed. So what did they consider? They considered this wooly bunny for commercial purposes. American Fuzzy Lop has the most delicate fur composition, and that’s why the products from it are fine-tuned. Like the skin quality, this breed is also best for petting. It is adorable, and most importantly -a family guy.

This 3-pound wooly breed is best known for its behavior, very gentle and polite. Jersey Wooly is famous for its personality; a little training is good enough. It will not scramble you home; this bunny stays where it was taught to have stayed.

This feature is possible for an advanced breeding initiative. It was first taken before 1984; the breed was crossed from Netherland Dwarf and French Angora. And these are the reasons for this docile pet.

It was first shown back in 1924. This breed aimed to make a combination between Chinchilla and Rabbit. That’s why the scientist used to call it “Strange Little Black.”

The fur of Silver Marten is soft and smooth; even the meat is also delicate. However, their nature is not good: they are hard to train for their aggressive attitude.

The cute and gorgeous color made Thrianta unique. It was first seen in the Netherlands; later, the german experts improved it.

One of the interesting facts about this breed is that it was developed for Orange-Nassau’s house ( home of Netherlands politics). We will cover this fact in our later write-up. Let’s move on to the topic for now.

Okay! Thrianta has a skittish orange color; this made their wool certainly expensive for the commercial sector. Farmers are fostering this cute buddy for its silky fur. Even some of the pet parents are adapting this for a better pet showcase.

Those who have this breed as pets are really happy with their behavior. Why? Thrianta is Gentle and takes less maintenance.

I promised to mention three things about the popular breed. And yes, you have read the barely mentioned information. I show you to nature, the purpose of the breed, and their origin. I know there are a lot of things to include. For that, I planned to write a single detail for each breed. What do I think, should I write or not? Let me know.