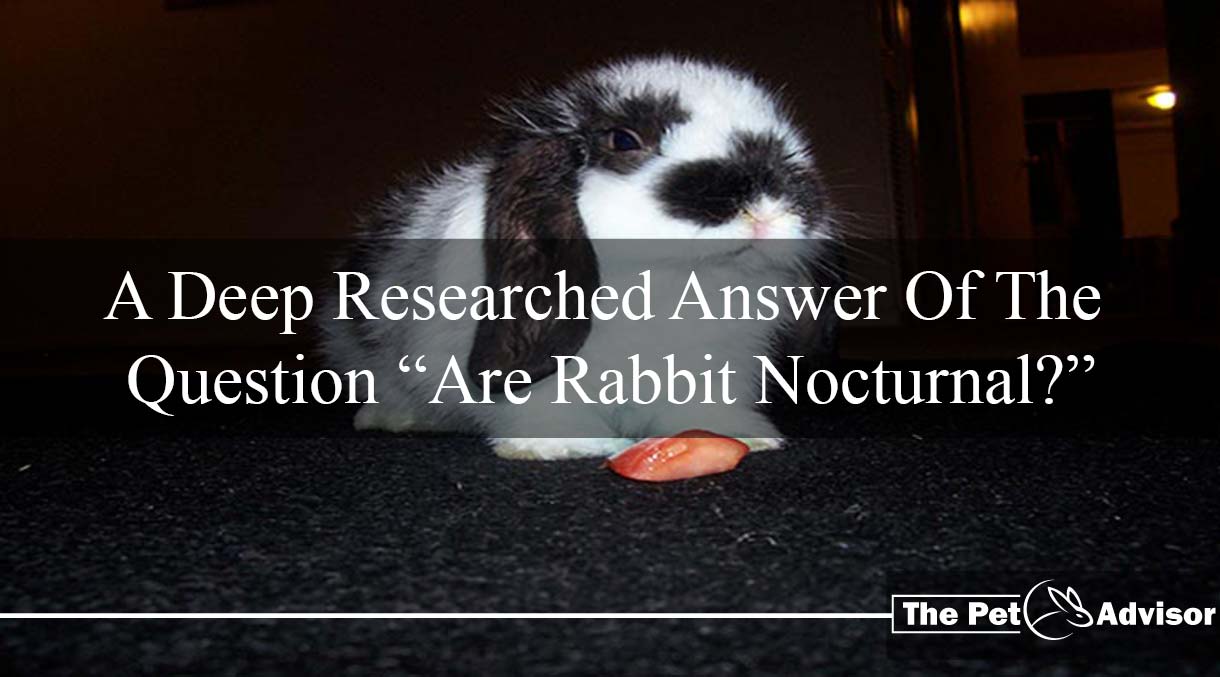 If you have clicked to look for the most searched question, “are rabbit nocturnal?” answer, then we will request to keep calm and take a jaw-dropping tour with us through this article. Are you ready? Then, let’s roll the ball by answering the question first.

Which is: “it depends” that’s what we figured out based on tons of research. Now, why have we determined to give a wobbly answer to you? Well, this is the point we want to explain throughout the article, had structured some bullets as the strong logic, which are:

And this is the first projection we wanted to research, to do that, had observed wild Cottontail and Mini Rex for one month. Over that monitoring, noticed that they were very active in the dawn and dusk.

Interesting fact it was for us, that’s why were started to find the reasoning and later revealed a mind-blowing fact which was: Rabbits are the most demanding prey animal for being in the lower position of the food cycle.

Thereupon, different animal keep this little one as their first choice at the time of searching for food and most of are nocturnal or diurnal. To avoid these sorts of predator’s eyes, Rabbits have invented the earlier said time comfort zone to search for food.

On, those two different times (dawn & dusk) it becomes tough for the daytime and nighttime predator to prey. Means, absolutely an intellectual way to defend the enemy, we must say, what do you think?

Let us know your valuable thought through our teammate Beth did not agree with that one. Because she wanted to get a clearer overview along the way. For her, got to the pit stop and had to explain the entire crepuscular animal features.

After that in-depth explanation, she was convinced eventually with our statement. On that discussion time: What things made Beth tie with us? Well, we put two of them below to show:

Those above things not only convinced our team but also strengthened the projection we started before. Still, two more projection had to conduct for making the words on fire and they are:

As we said two more left and here you will read one of them but wait “are you confused about that title?” Frankly, we were too when another teammate Alina spotted this one, over her rabbit. Thus, forwarded the floor to her for shouting about this.

She said that “for my office work, have to sleep at day time and Lina (her rabbit’s name) sleeps with me too, since she becomes tired after playing all night” which proved that rabbits are nocturnal, too.

Now, how far is the statement true? That was our quest, to come up with a solution again we rushed over Crepuscular theory where had revealed that: creatures used to balance their life by analyzing the surrounded situation.

From that point we believed that: rabbit can be a nocturnal animal if the influence of its surroundings to be that. Some pets take time to adjust the environment, and Alina’s pet may be the best example of this statement.

When she started to bring her bunny up at the very first, faced that the little one became active at evening and early morning also it continued for two months then, day by day her rabbit habituated with her at last. Therefore, we can say that the rabbit is nocturnal.

Finally, we examined, if the rabbit is diurnal or not, found that the rabbit is a diurnal animal. To prove that, we went to take a short pep talk with Shannon because he owns a commercial rabbit farm and breeds various rabbits at his farm.

Told that the rabbits of his farms were mostly active on daytime sleeps at nighttime. In addition, they played, strolled, exercised on the whole day, the reason behind being diurnal is the environment and safety.

Added that, when an animal realizes that they are safe and sound at a certain place, adapts with that place and one day becomes habituate with that. The sayings are like earlier explained, right?

Alright, there is a slight difference, one is environment other is surroundings. For instance: if you look at the three situations we explained earlier, and then noticed that huge situational difference, right? Yes, that is the point we wanted to establish for this last logic.

Through analyzing all the above major bullets, we have answered the question diplomatically because rabbits balance their activities based on surroundings and environment. As a result, it is difficult to judge whether they are nocturnal, diurnal or crepuscular. From that point, we answered, “It depends.”

Apart from all above that, we intend to share some considerations over which this whole article stands by uplifting its head and those are none other than some questions. They are:

What is the average lifespan of wild cottontail rabbit?

Ans: Not more than Two to three years.

What is the average life span of the pet rabbit?

Ans: Most of the pet rabbit can sustain Seven to ten years.

For structuring this answer, our team had to brainstorm over the questions. Example as: Why wild rabbit lives for two to three years? Why do pet rabbit lives for seven to ten years? These inquiries lead them to figure out the question: are rabbit nocturnal?. So let us know your evaluation regarding this content. Till then take care.