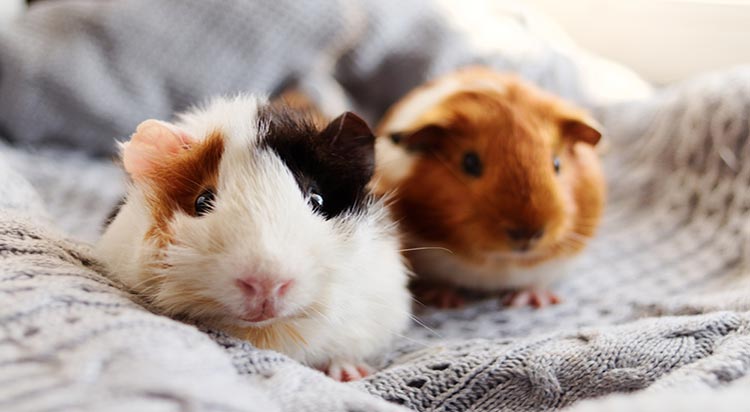 You’re definitely thinking outside the norm if you’re planning on getting a guinea pig as a pet. The idea of taming a guinea pig won’t be outside mainstream for long since many people are taking interest in fondling these cute furry little creatures.

People keep them for a number of reasons. While it’s not much difficult to find out why they’re gaining so much popularity, a list of pros and cons can also be presented. This popular global rodent is found in almost every part of the world. So, do guinea pigs make good pets? Let’s find out.

In this article, we’ve sorted out some pros and cons in a mainstream way, so it becomes easier to comprehend the idea of having guinea pigs as pets.

They’re furry and adorable: This is undoubtedly the prime reason why guinea pigs are so much talk about. The cute furry little creature makes its owner feel better whenever they have them around. And you can’t really help staring at the delightful sight of their continuous chewing.

They live long enough: Talking about its lifespan, guinea pigs live up to 7-8 years on average. It’s surely a great thing, isn’t it? The can make great buddies for little kids while teaching them the sense of matured responsibility over time. They outlive hamsters or mice, which is a fact you can easily relax on.

Strong: Guinea pigs don’t fall victim to major diseases easily, and this fact is quite established. They hardly give the owners troubles concerning its health, thanks to its strong immune system. You’ll rarely see them falling sick, making them safer around little kids or toddlers.

They are gentle: Being gentle is one of the most noticeable characteristics of guinea pigs. This basic trait makes them an easy choice for us to have them as pets. They are extremely mellow, gentle, and benign towards the family, and these animals never cause havoc like dogs or cats. Moreover, most of them tend to be tied into a routine. This fact makes them the ideal choice of a pet for the people who can hardly maintain a pet due to massive workloads.

They are affectionate: These adorable creatures are also excellent greeters to their owners. And they greet them pretty frequently. You might be surprised by the fact that guinea pigs are always eager to build a loving relationship with the members of the family. They tend to do it in a way that makes them the core attraction in your house. They’ll never let you feel bored when around you.

Easy to move around: The small creatures easily move around the house without any help. Besides, they do not require bigger spaces for running about, playing, or exercising. And you won’t have to take them out so often. But you can always carry them around easily because of the small size they have.

They’re on a vegetarian diet: The fluffy pets maintain a routine vegetarian diet. They follow a nice vegan diet too with much ease. So quite understandably, their trash bins smell much less than those of dogs or cats. Feeding them also becomes pretty easier due to their vegan diet which is also feasible and cost-efficient.

They are easily manageable: The guinea pigs adapt faster than most other pets and easily adjust with the surroundings. It surely makes them the pet for every house.

They require lesser attention: Generally, a guinea pig tends to retain the same mood. No matter you pay much attention to it or not, there’ll hardly be any mood swings.

Till now, we’ve covered all the positives of these lovely little animals which are catchy enough to interest a person to adopt them as pets. But before you decide to adopt one, check out their negative aspects as well. Have a look at our list down below.

Possible space issues: Rather than exploring the outdoors, these little animals prefer remaining indoors. It’s also the reason behind them needing a bigger space that keeps them upbeat. Running around is also their hobby which requires a larger space as well. Besides, they might even get aggressive within short space.

Sensitiveness: Every breed of guinea pigs are of sensitive nature. They are sensitive towards worms, mites, and other pests. You must take care of them properly when something like this happens. Otherwise, infections can cause them to lose their fur.

They often smell bad: Like rabbit owners, the complaint is common among the guinea pig owners that their pet smells bad. This occurrence happens when the cage is not cleaned up on a regular basis. So you somehow have to maintain the tedious cleaning thing. However, the bad smell may also emit when the male ones mark their territory. So, guinea pigs are not the kind of pet you’d like if you cannot tolerate this.

Shyness:Guinea pigs are naturally shy, and they don’t accept a new owner easily like a cat or a dog. It’s an issue when someone wants to adopt one for quick elation and mental boost.

They are noisy: These little animals can be super noisy at times and may not let you have a sound sleep.

Costs: Yes, guinea pigs cost you less than your dog or cat does. But with the course of time when they grow up, you’ll have to count your bucks on cages, vet charges, hay, and veggies.

They destroy: If left alone, guinea pigs may destroy a handful of your stuff. Especially, they’ll hardly spare the chewable.

They’ll leave you sad: As we’ve mentioned before, they live 7-8 years on average. So when they pass away, they leave you with a sad story for the longer term.

Can I keep my guinea pig with my rabbits?

Rabbits can be a threat to your guinea pigs. There are situations where rabbits and guinea pigs fight over food. So it’s better not to keep them close.

Despite having the drawbacks, can I still take the risk of having a guinea pig?

Well, it’s totally up to you whether you’ll pet a guinea pig or not. However, they’re always a good company to have around despite their drawbacks.

Can I keep my birds with my guinea pigs?

If you’re having a large bird in your home, then you should separate the guinea pigs. Birds can often kill these small creatures.

The points we have covered above are logical according to our veterans. Yet, views might vary from person to person. But above all, your personal preference tops all these facts when you adore guinea pigs and would love to have them as your pet.